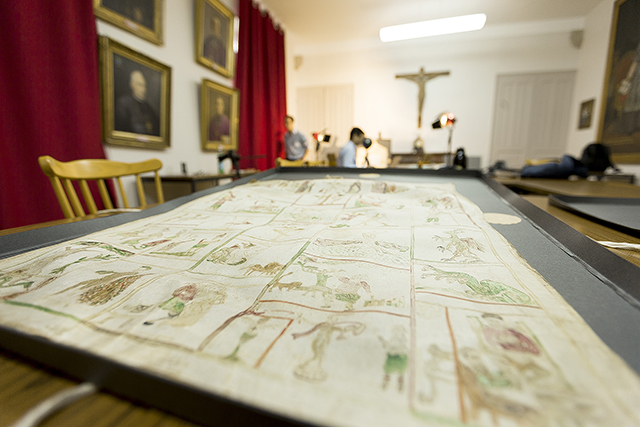 The CARAA had the honor to participate with the DRAC Bretagne and Marine Letouzey in a vast study of painted parchments by Michel le Nobletz (named the “mad priest”) kept in the Diocese of Quimper.

These parchments dated from the 16th and 17th centuries, some of which were painted by Alain LESTOBEC, were examined and analyzed.

The study of the pigments, the search for binders as well as the multispectral examination of these parchments made it possible to clarify certain hypotheses concerning the attribution of these works as well as on the restorations that they underwent.

The project was concretized in the form of an international conference (June 2017) and a collective publication (October 2018) under the direction of Yann Celton.

The analyzes were conducted by non-invasive XRF spectroscopy, Raman microscopy, micro-FTIR and the examinations were performed by mean of a multispectral camera (360 to 1200 nm) and UV fluorescence with the help of Xpectraltek.